Code editors and particularly integrated development environments (IDEs) are generally seen as feature-heavy products and the download sizes of the two big hitters, Eclipse and Microsoft Visual Studio, are huge. Is it possible to replace these, either in their entirety or by emulating a core set of features and what other features can cloud computing offer?

Cloud9 is based on open source software and supports both Mercurial and Git for source code management. Signing on can be via a Bitbucket or GitHub account and projects can be imported from these. Cloud9 supports syntax highlighting for Javascript, HTML/CSS, Coffeescript, Ruby and PHP, with more support for more languages promised. Node.js projects can be run within Cloud9 and deployed directly onto Joyent servers. Teams can be managed within Cloud9 and there is a chat facility for communicating with team members. Offline editing is supported and there is a terminal window for executing commands, such as Git commands. 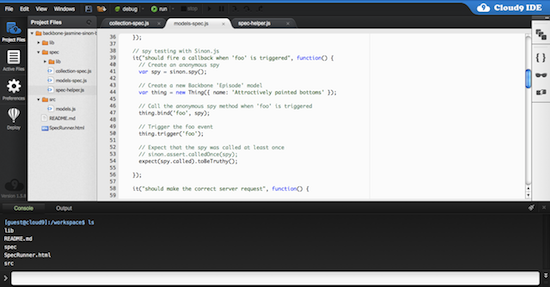 In appearance, CodeRun borrows heavily from Microsoft Visual Studio and it’s possible to open and edit Visual Studio solutions and project files. Code can be uploaded and downloaded for offline editing and online testing. It’s possible to set breakpoints and step through hosted code as well as viewing the stack and watching objects and variable. 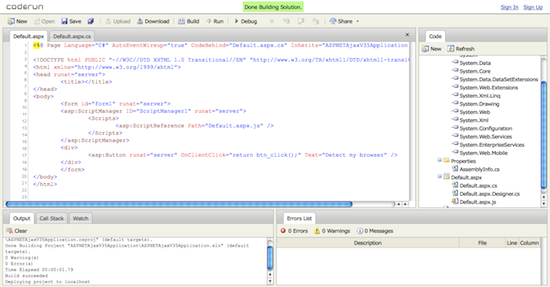 Having a standard development environment is a real boon: there should be no more excuses of “well it runs on my machine”.

A great promise of a cloud computing IDE is delivering remote collaborative development. Whilst pair-programming is one of the cornerstones of extreme programming, it’s difficult to do when team members are not co-located; screen-sharing via, say, Skype can be bandwidth heavy and sharing via GNU Screen restricts users to a shell-based editor with a single cursor. Cloud9 have announced its intention to support collaborative editing in its paid-for version at some point in the future.

The latency that comes with running code in the browser can be a real pain. Unit tests that should return within fractions of a second are delayed by having to go out to the web. It may be that a server-based solution comes into its own when large numbers of unit tests must be tested or when performing functional and integration testing. Theoretically, when processor-intensive tests are present then a cloud computing IDE should be able to leverage its host’s computing power. Being able to rapidly get code into and out of a cloud computing IDE environment may be one of the most important factors when deciding which to use.

Although they’re both cloud computing IDEs, Cloud9 and CodeRun feel as though they’re aiming at different developers: Cloud9 leans towards Ruby, Node.js and open source software whereas CodeRun will seem instantly familiar to users of Microsoft Visual Studio.

Whilst neither is likely to make in-roads into a co-located development shop just yet, the attraction for remote teams is strong and can only increase as new features are delivered.

As a contract developer and manager I’ve worked in a wide range of enterprises in a variety of countries where I’ve encountered everything from great work, awful work, bizarre work, all the way down to quasi-legal work. If you think that you recognise your own organisation within my articles then you’re undoubtedly wrong, where you work isn’t that unique.